Go to the main content
Book now the best seats!

Season after season – with themes that explore a wide variety of different avenues – we present you with exciting new stories. In the coming season you can take that very literally.
Although our main disciplines –music, dance and sound art – are abstract art forms that don’t require words, they are often based on an underlying – hidden or manifest – narrative. And that narrative inspires artists to draw from many different sources: mythological epics, religious icons, folk sagas, topical issues, etc. But inspiration for their creativity is also to be found on the street, where every passer-by is the central character in his or her own story. Season’s Photographer Bas Losekoot is expert at turning otherwise everyday snapshots into exceptional tableaus. After photography projects in Asia, Africa and North America, Bas has now taken to the streets in Bruges to capture the diversity of a living city.

That wide array of narratives – the presentation of polyphonic stories – is therefore our starting point for projects that range from the Gospel to the Tibetan Book of the Dead, and from the 1001 Nights to poems by Petrarch. Particular attention is paid to Black authors Toni Morrison, Maya Angelou and Clarissa Pinkola Estés. They wrote the lyrics for the song cycle Woman.Life.Song that will be introduced by our Season’s Thinker Neske Beks. As a multidisciplinary artist, Beks will bring in many different perspectives: from stories about female role models in literature and music to texts and rituals about connecting and self-care. 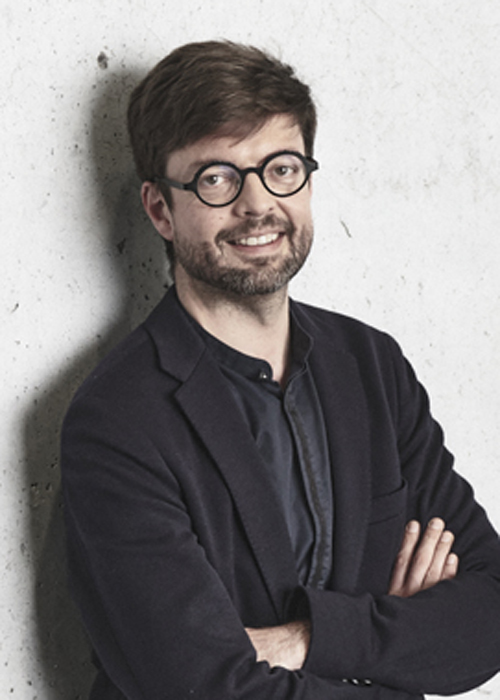 Artists, such as choreographer Jan Martens in FUTUR PROCHE and poetess Dominique De Groen in the song cycle Counterforces, search for new narratives in response to and as comfort for our often gloomy and disturbing visions of the future. Season’s Composer Kris Defoort – who is presenting his brand-new song cycle Pieces of Peace, featuring singer Veronika Harcsa – fits nicely into that list. As composer of several masterly operas, Defoort often starts from the text. This season you can enjoy both major orchestral works and more intimate repertoire, both written and improvised.

More topical themes can be found in music theatre, with projects such as David Lang's Prisoner of the State and a new edition of the music theatre festival All Arias. Among other things, this latter presents two creations about the position of women: from an Arab perspective and throughout history.

In vocal compositions, the stories ring out loud and clear: from poetry and prose to theatrical texts in song cycles, oratorios and music theatre. Unspoken stories are to be found in symphonic poems or in ballet music, such as Zemlinsky’s Die Seejungfrau, Scriabin’s Poème de l’extase, Smetana’s Moldau and Stravinsky’s Petrouchka. The bright colours of the orchestra tell a variety of stories. But even just a keyboard is enough to transport us to landscapes beyond the music, such as those in Liszt's Années de pèlerinage (Years of Pilgrimage) or Grieg's Lyric Pieces.

In Kris Defoort's Dedicatio and Elgar's Enigma Variations, people close to the composers' make their presence felt just below the surface. In the Masterpiece Week around Olivier Messiaen, we present both his open declaration of love to his first wife, Poèmes pour Mi, and his masterly tribute to his second wife, the Turangalîla Symphony. In the coming season, the personal 'petites histoires' of such compositions are accorded extra attention.

In our dance programme too, the narrative takes precedence over the abstract, with projects such as Anne Teresa De Keersmaeker's Mozart / Concert Arias, Akram Khan's Jungle Book reimagined and Peeping Tom's Triptych. Dance in Bruges is once again in full swing with the festivals December Dance and Bits of Dance, but from now on also with an annual Makers trajectory. Each season a new dance maker will commence a two-year creative trajectory, with our support and that of our partners Cultuurcentrum Brugge and KAAP. First off the mark is Lisa Vereertbrugghen whose journey will culminate in a new creation in the 23-24 season. Lisa Vereertbrugghen is one of the four Makers the Concertgebouw is mentoring towards the next step in their artistic development. Three music makers complete this quartet. For them the focus is on their transition from performer to maker. In ambitious projects, soprano Lieselot De Wilde, pianist Frederik Croene and oud player Tristan Driessens will profile themselves as composers and/or creators of scenic works. By intensively supporting these individual artists, the Concertgebouw is also taking its own step forward as a house of creation.

In the second edition of the Têtes-à-têtes festival we once again opt for the intimacy of the Chamber Music Hall. In this delightful series of thematic concerts, the dialogue between audience members and between artist(s) and listeners is central. And afterwards there is plenty of time to continue that dialogue in our pop-up lounge bar on the sixth floor. Four young pianists bring us Piano Stories. The songs of Schubert and Boulanger are performed alongside new compositions. And in the Ton sur ton series we initiate a dialogue between several musical traditions.  With their intriguing instruments and repertoire, musicians from Asia and the Middle East open our ears to something new: an ideal opportunity for deep listening.

From now on you will be encountering the term Deep listening increasingly often: as the point of departure of our sound art plans and as a call to develop new listening skills and an openness to the unfamiliar. During two happenings per season, you can experience the richness and versatility of deep listening in lectures, concerts, lecture performances and workshops. In a season that revolves around stories, deep listening is metaphor for an appropriate response to today's diversity and complexity. After all: ‘speaking is silver, but listening is golden’.

The story of this season will only have a happy ending if we reach a large and diverse audience. Our motto ‘the Concertgebouw is for everyone’ is therefore as valid as ever: from projects for childcare and schools to amateur performers, and from people with dementia to the stories of a number of Bruges prison inmates in the TimeLock project.

Bestsellers such as the Bach Academy, Budapest Festival, Iedereen Klassiek and CLUB Surround are naturally still in circulation, but now and then, let your season be coloured by an unexpected plot twist: the stirring surprise of fresh adventures!